I recently read an article in the Economist that credited Haier’s success to its CEO’s (Zhang Ruimin) decision to eliminate middle management. The move generated innovation that any Silicon Valley start-up would be proud of. I was not expecting a large Chinese firm to lead the way in being nimble and customer driven but it worked for them and I could see it helping many US companies, particularly game companies.

As a little background, Haier has sales of over $25 billion, is recognized globally for reliability and marketing expertise and has seen its market share grow from 3.1 percent to 9.6 percent.

Haier’s 80,000 employees are organized into 2,000 zi zhu jing ying ti (ZZJYTS), self-managed teams that perform many different roles. Each is responsible for profit and loss, and individuals are paid on performance. END_OF_DOCUMENT_TOKEN_TO_BE_REPLACED

I (and almost everyone else) have spoken frequently on the importance of smart collaboration and good teamwork. A recent column in Forbes magazine, “Team Management: Think Small and Agile” by Rich Karlgaard, highlighted one element of creating optimal teams that I had neglected: team size. Karlgaard stresses that in an age of swiftly moving technology, teams become more important because humans do not evolve as quickly as the rate of Moore’s Law. People are the slowest-moving parts in complex organizations, effectively becoming the gating factor. To open this gate, you need to form nimble teams that not only make the people less of a gate, but also turn them back into resources.

There is an optimal size for every team, and it is usually smaller than you think. It starts with Jeff Bezos’ “two pizza” rule (there is some argument as to who created the term, but I always defer to Bezos): If it takes more than two pizzas to feed the team, the team is likely too big (As I am based in Chicago, I may want to drop that to a one-pizza rule, because two deep-dish pizzas can feed a lot of people).

There was a great article recently in the MIT Sloan Management Review,  Using Open Innovation to Identify the Best Ideas by Andrew King and Karim Lakhani, that discusses how to use open innovation, both across your company and with your customers, to find the best ideas. The article describes how companies are opening up innovation (which can be anything from game design to new products to new processes to marketing creative) but also the challenges you face when doing so. As the authors point out, success relies on finding the best ways to organize and manage the process. 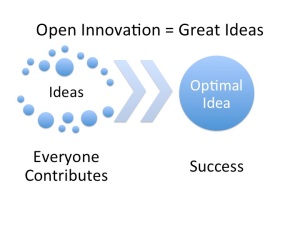 The first step in optimizing open innovation is successfully opening the idea-generation process. You need to first decide whom you are opening the process to: your entire team, the company, your key customers, all customers or the world. Once you have selected whom the process is open to, you need to create the optimal way to generate strong ideas. END_OF_DOCUMENT_TOKEN_TO_BE_REPLACED

Last month, I wrote about the telltale signs of a doomed strategy. Today I want to write about the foundation of creating a successful strategy that builds sustainable competitive advantage. 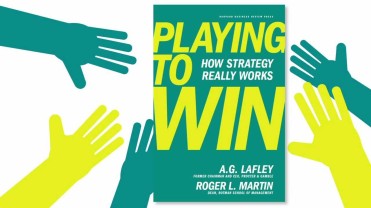 As I’ve mentioned in previous posts, A.G. Lafley and Roger Martin do a great job in Playing to Win of showing the common factors that demonstrate a winning strategy. END_OF_DOCUMENT_TOKEN_TO_BE_REPLACED