First, I want to apologize for the lack of new posts this summer but have been busy at a new job and moving my family to Europe. I’ll be posting again in September.

I also wanted to see if anyone was interested in a great opportunity with PokerStars (part of Amaya). I am looking for someone to lead user acquisition, growth and cross promotion for our team, which is growing rapidly. Click here to see the job description.

The good news is you already know how I think, so there should not be any surprises with the position.

Many companies, especially game companies, build out their products based on how early customers like the product but this approach can inhibit growth. An article in the Harvard Business Review, “Focus On the Customers You Want, Not the Ones You Have” by JP Eggers, shows that the hard part in creating a successful product or game is not appealing to users early but sustaining.

The problem with early users

Early players are by definition early adapters. They probably have a higher preference for innovation and are more likely to take risks. They may have different ways of making decisions, including whether they monetize in a game, if they invite friends or if they come back. An early player may be very enthusiastic and tell friends but then go on to the next shiny object, so basing decision on their play would suggest you should focus on getting them to bring in as many users as possible before they leave.

Companies run into problems if they base product decisions on these early adopters, which is often the case. Eggers also points to research that shows early adopters are different. According to Eggers, “early adopters are typically younger, more willing to take risks, more eager to try new things, more affluent, and substantially less numerous … First, what worked with early adopters isn’t likely to work with later adopters. In launching new products or services, start-ups tend to accumulate deep knowledge about customers at the leading edge of a technology. But that knowledge doesn’t necessarily apply to other consumer groups; that’s one reason so many new firms struggle to create second rounds of offerings. To be successful, companies need to innovate for the consumers they want, not the ones they have.”

Another issue comes up because early adopters do not want to see the product expand to the mass market. A chess app may appeal strongly to grandmasters but if it becomes something the mass-market plays, the grandmasters may no longer want to use the product. Similarly, Facebook lost some of their young users when their parents started using it, but there were hundreds of millions more adults than teens. Although it worked for Facebook, the influx of users so alienated the early users of MySpace, you may no longer even remember MySpace.

There are several strategies to combat the problem of having a product that either is not attractive to new users or alienates existing users:

The key is understanding that what appealed to your first users, and their behavior, is not necessarily what will drive your growth.

I have heard many people in the game industry complain that advertising in games (free to play or otherwise) is a bad thing, or even immoral. The reality is it is actually a benefit to people—your customers—if done properly. It provides players with more options, allows developers to create games they would not try and allows people’s favorite games to remain live.

More options and value for players

The most effective advertising in games is advertising that the player sees as creating value. These benefits manifest themselves in several ways: 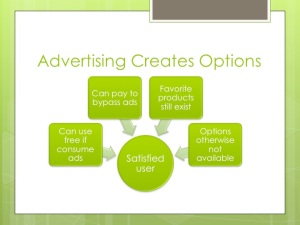 Most other industries embrace advertising because it provides the same benefits to users. Viewers of television often prefer networks that do not charge (though they complain about it sometimes) rather than pay subscription fees. Those who hate advertising, though, have options to focus on networks like HBO or use services like Netflix. Print readers often enjoy subsidized costs for newspapers and magazines as advertising revenue allow the magazine to offset most or all of its costs. Additionally, advertising allows many publications to give away their product for free in exchange for the user to consume ads.

The reality is that advertising benefits players in many ways and developers should embrace it as a way to provide more value to users. By integrating advertising into the business model, you can find ways to add value to your players and give options to players you other wise had to neglect because they did not monetize through in-app purchases.

This is Lloyd Melnick’s personal blog.

All views and opinions expressed on this website are mine alone and do not represent those of people, institutions or organizations that I may or may not be associated with in professional or personal capacity.  I am a serial builder of businesses (senior leadership on three exits worth over $700 million), successful in big (Disney, Stars Group/PokerStars, Zynga) and small companies (Merscom, Spooky Cool Labs) with over 20 years experience in the gaming and casino space.  Currently, I am on the Board of Directors of Murka and GM of VGW’s Chumba Casino