I recently had an epiphany, that the Reply All option to email creates undesirable and sub-optimal behavior, similar to the proliferation of meetings and Powerpoints. Rather than progressing a conversation, Reply All often keeps people from making substantive contributions and prompts people to ignore the key issues. Of course, sometimes there is value to Reply All, you share information with multiple people who need it, but it is something you should use judiciously rather than as a default. 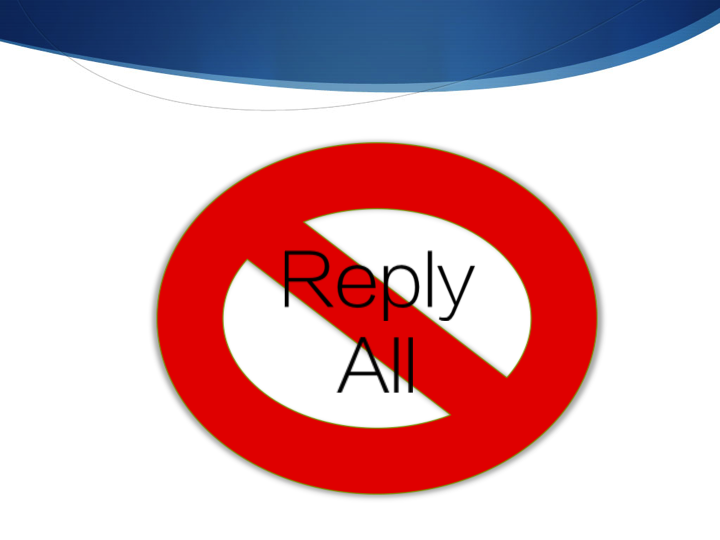 The key problem with Reply All is that it is often used by someone to make a point or impress other people on the thread, normally higher-ranking executives. Some people see it as an opportunity to present knowledge or an idea not necessarily relevant to the message, to impress some on the thread. This creates a situation where people discount the entire thread and sometimes the original reason for the email is lost, without appropriate action taken on that email.

Rather than Reply All, you should determine who you want to communicate with and only include those on the response. Then, rather than using it to posture, you are proactively moving the conversation forward with relevant parties.

Watch what you say

While most people are polite to their colleagues in person, Reply All often invites boorish behavior. Building on people using it to impress, some people feel the best way to impress is by disparaging a colleague. The thought is that by making your colleagues seem weaker, it elevates them. The reality is that degrading a colleague will often permanently weaken your relationship with that colleague, they are less likely to support your future initiatives or go out of their way to help you and if they reach a leadership position they are likely to remember your behavior. Others on the thread, however, are also unlikely to be impressed, they will actually probably question your character and be less likely to support you in the future.

If there has been a legitimate mistake, reply directly to the person who made the mistake and give them the opportunity to correct it. Your goal should be ensuring the organization has the right information, not that you know more than your colleagues. If they do not agree with you or fail to correct, then respond (but only include relevant stakeholders) but do it in an objective manner that does not throw your colleague under the bus.

Why be the smartest person the thread

The biggest negative often of replying all is that it dissuades others from being part of the conversation. As I wrote several months ago, you should not try to be the smartest person in the room, and the same holds true for email threads. Rather than trying to impress everyone, learn from them so you can come to the best possible solution. Let everyone put forward their best ideas. Ensure a vibrant conversation, listen to others and, if anything, respond primarily to solicit more ideas.

The key to communicating effectively is to think first. Determine who you should be speaking with and limit your communication to them. Then ensure you are propagating a message that moves the conversation forward, more likely to a better solution. Most importantly, avoid trying to impress others, especially at the expense of colleagues, and focus on the appropriate message to the right people.