Although I have written about the need to focus and personally always try to, it is much easier said than done. I recently came across a blog post from VC Mark Suster, Why Great Executives Avoid Shiny Objects that does a great job of stressing the importance of focus on the important. One quote by Suster drives home the problem, “many leaders fall into the trap of doing too many things but not accomplishing enough.” Suster makes the point that it is most important to complete the important things, not to start a lot of things.

Suster points out that while it is great to talk potential deals with a dozen companies or interview twenty candidate for a position, actual value is driven when you close a deal or have a candidate start at your company. Suster uses the graphic below to differentiate what is important. 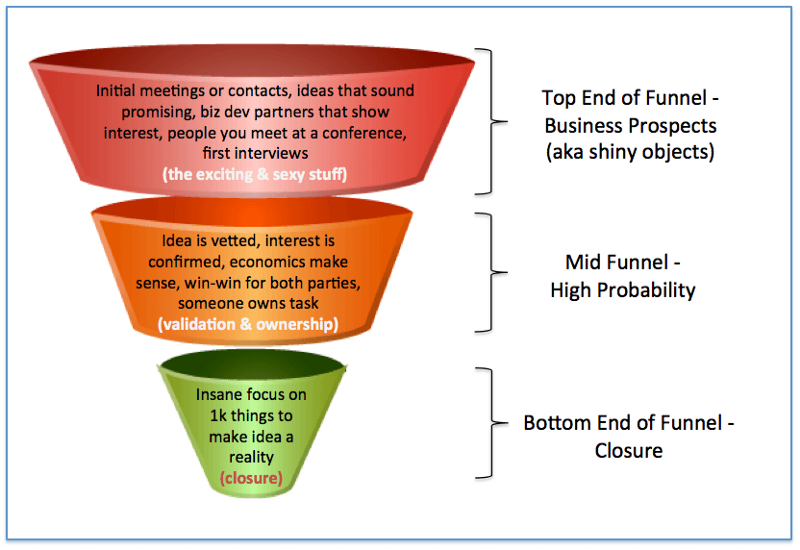 The top of the funnel is what he describes as shiny objects. They are activities that make you feel and appear busy, often make great conversation items with your boss or at Board meetings, but in and of themselves do not create value. While you do need a funnel so you can eventually achieve the important thing, you should not spend a disproportionate amount of your time on it. As Suster says, “having interesting and frequent opportunities at the top of your funnel is important, of course, but the ultimate score is only measured on the bottom end of the funnel.”

Executives do not always pursue the top of the funnel because they do not understand the relative value, it is often the path of least resistance. It is relatively easy having a first business meeting and showing your Powerpoint or talking to someone you met at a conference, while analyzing a potential deal and negotiating the final agreement is very hard and time consuming. Sometimes people focus on the top of the funnel because it makes them look busy but is actually the easy route.

To truly succeed, and make sure your people succeed, you need to be “obsessed” with the critical tasks as Suster is. It’s why he “[is] willing to disengage at times from the flurry of ‘activity’ because when [he has] something that needs to be finished the only way [he] know[s] how is maniacally focus on the bottom end of [his] funnel.”

You should build your own funnel, analyze your activities, and make sure you are spending most of your time on the Bottom End of Your Funnel, my guess is you will be amazed at the results.