One of the challenges successful game developers face is what features to add to the product. With a successful game, you are not in panic mode but you also must deal with the reality that in a free-to-play product you need to keep players engaged or you will become the next Trivia Crack. The fundamental issue is adding features that are useful and fun for your existing players, that enhances their enjoyment of your game.

There is an excellent post by Casey Winters that highlights three keys to building features that enhance a successful product: 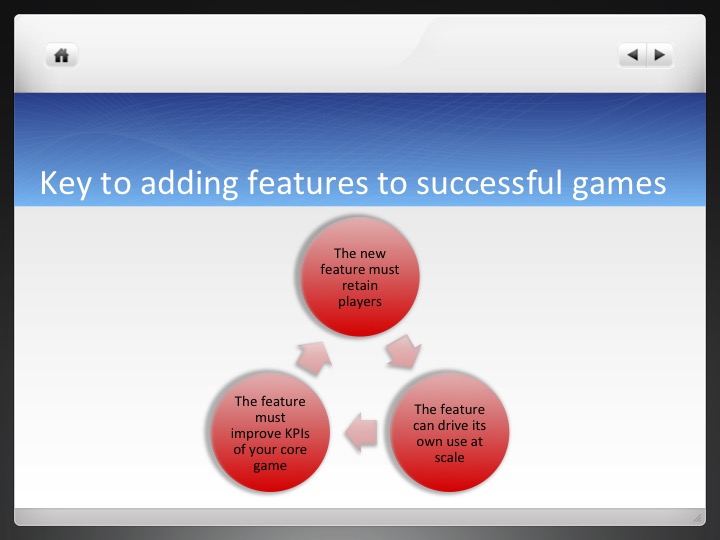 The last point is critical to success. I used to be at a game company where product managers regularly presented analysis of their features and bragged about the great performance of the feature. Overall, though, the company’s games continued to lose players (DAU) and monetization per player (ARPDAU) was also decreasing. While the features appeared to perform great in a Powerpoint, they actually were costing the company money because they drove lower overall performance.

How to add features that improve LTV

While you may infer from the previous sections that you should only integrate features that appeal to everyone, the opportunity is to segment your players and build features to appeal to target segments. If you limit yourself to only adding features that are accretive to everyone, you have a small pool to pull from.

Given you already have a successful game, by definition your players are already enjoying your product. While there may be opportunities to add features everyone enjoys, you have a bigger set to choose from if you also identify features that may appeal to a subset of your players. This is particularly powerful because this feature can appeal to a segment that is likely to churn and keep them engaged or a segment that does not monetize and prompts them to spend. Conversely, it could only appeal to the ½ of 1 percent that are VIPs but given how much they spend could have a great impact on revenue

If you are building a feature that appeals to a specific segment, then you must be careful not to violate the third key to creating a successful feature, you do not want it to impact negatively overall KPIs. The way to achieve this balance is by positioning or displaying the feature only to the target audience. This can be done as an AB test, where you only surface the feature to specific players. It can be achieved through targeted CRM (in-game banners, push notifications, email, etc.) that is only sent to players in the target group. Surfacing a different UIUX to players who you want to engage with the feature can also accomplish the same goal. The key is maximizing how much the target audience uses the feature and minimizes how much other players see it.

Using the blackjack example yet again, we can illustrate how it could help a social casino game. Overall, slots monetizes much better than blackjack. It is a faster game and many blackjack players will play in a way so they lose very few chips. If you added blackjack to a successful slots game and promoted it across your player base, you probably would get great engagement as a lot of people love blackjack. It would, however, drive some players from your slots to blackjack where they are likely to monetize at a lower rate. If you were looking at how it would impact overall performance, then, you would say blackjack is a failure.

If, however, the blackjack game was not in the main lobby but embedded deeper in the game and you then drove players who were likely to churn (maybe you have a nice machine learning algorithm that can identify these players) to blackjack, it would engage some of these players. They would then come back regularly to play and rather than churn some would monetize. Thus, you would have a successful feature that helps the overall product.

Add features that help your game

Although it sounds obvious, when building your product roadmap you need to dive deeply into each potential feature and identify how it will improve KPIs of a target segment. Effectively, how will it solve a problem for you or your player (user churning, user not spending, etc.). The bigger the problem, the higher the priority.