One of the most insidious phrases I have heard almost everywhere I have worked is, “it is what it is.” The phrase portends inefficiencies, politics, despair, incompetence or a lack of caring (or a combination thereof). It is critical to recognize this phrase as a problem itself and also not accept the situation it is used in reference to.

When you are likely to hear “it is what it is”

The phrase “it is what it is” generally means that the situation is how the company operates and cannot be changed. There is nothing that can be done about it. It may be that there are certain processes in place that inhibit efficiency or the ability to drive new initiatives.

The phrase will come up when someone sees an opportunity to increase profitability, maybe through a new marketing channel or by changing a software provider, only to be told the company needs to continue doing things the existing way. You may ask why is our marketing budget focuses on MySpace, and the response is we know it probably is not optimal but “it is what it is.”

You also hear the phrase when somebody is in the wrong position in the organization, cannot do their job effectively and it inhibits other people’s performance or initiatives. In American Football, a fast receiver may ask his quarterback for more long-pass attempts as he has his defender beat. The quarterback responds he would love to but the offensive coordinator does not understand the passing game. The receiver asks him to talk to the coordinator about the opportunity but the quarterback responds, “it is what it is.”

Another situation where you hear this destructive phrase is in reference to a company’s systems and software. The company may be using Windows 98. When you talk to IT about getting a newer operating system you are told they only support Windows 98. When asked why, the response is we know there are better systems out there but “it is what is.” You go back to trying to create your marketing strategy using WordPerfect. 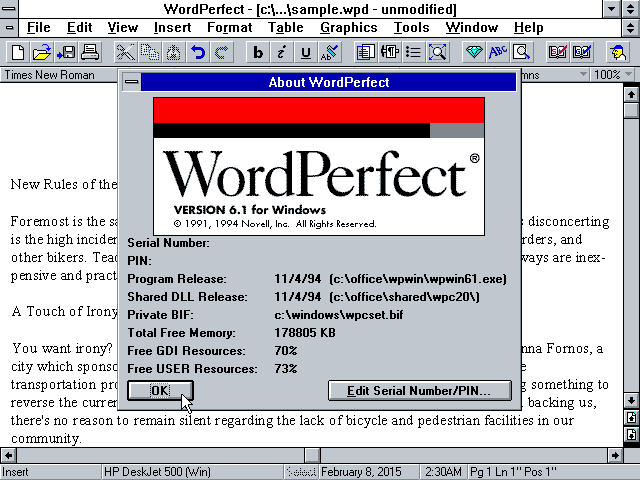 The most destructive impact of “it is what it is” is not the initiative that may get stalled or the sub-optimal allocation of resources but how it destroys a company’s culture. When someone repeatedly hears “it is what it is” in response to ideas on how to improve the company, they eventually stop proposing ideas. The company then stops innovating and optimizing, which in the hyper-competitive era we live in, is the beginning of a death spiral.

”It is what is” also erodes employee morale and increases churn of your good employees. Most people work not only to make money but also because they want to achieve (most studies find that making money is not one of the key motivators for people). When the culture of it is what it is becomes prevalent, the high achievers become the most dissatisfied. There is very little worse than not pursuing an initiative they know would be good for the company not for a good reason (cash flow, strategic focus elsewhere, etc.) but because “it is what it is.” These employees are likely to find an opportunity where they can strive to be best and grow their company. This also creates a death spiral where the company is left only with people who are content to maintain the status quo.

I learned a related lesson in my childhood while watching Star Trek (a show that largely shaped my adult life), a situation called the Kobayashi Maru. Not to be too geeky, but the Kobayashi Maru was a simulation given the officers at Star Fleet Academy(the training academy for people who would fly spaceships) where they had to decide between two awful scenarios, both of which resulted in a great loss of life. The point of the simulation was to show that sometimes there is not a good solution and no Star Fleet cadet ever passed.

One cadet, James Kirk (who even non-geeks probably heard of as Captain Kirk), though, did pass. What Kirk did was go in one night and reprogram the simulation, which was against Star Fleet rules. Even though it was against the rules, because he ended up succeeding where everyone else had failed, his victory was accepted.

The lesson here is that even in a no-win situation, finding a way to succeed by changing the rules. Kirk succeeded because he did not accept that “the Kobayashi Maru” is what it is. He took the initiative to make it something else and make it beatable.

Do not accept doing things sub-optimally

Start by never, ever, saying “it is what it is.” If you catch yourself about to say it, think about the situation and how you can change it. Never accept the status quo unless it really is the base path forward. If it is not, take the initiative to change the way things are done. If there is an incompetent person blocking your path, find another path. Find an ally who will work with you to drive an initiative over the blocker. If there is a better process or software solution, take it on your self to build the business case. It is easy for someone to block you by saying “it is what it is,” it is much harder from them to block you when you have a well reasoned business case in how the change will make the company an extra $500,000.

If you are in a leadership position, train your team not to accept (or say) “it is what it is.” If they are pushing an initiative forward and run into resistance, empower them to find a solution or change the rules. Only in extreme cases should they escalate the situation. It is more important that you foster a culture that your team members find a way around “it is what it is” rather than you doing it in each case (which is almost as bad). Tell your team you do not want to hear what we can’t do or are not allowed to do but want to hear how we are doing it.

When you run into “it is what it is,” rather than accepting it let everyone know the cost of not changing. If you hear it from a colleague or someone on your team, either encourage them to find a way to change things or take it upon yourself. Just as accepting “it is what it is” can put a company in a death spiral, showing it actually is not the case leads to a healthy, growing organization.

One thought on “It isn’t what it is”