Most people, myself included, believe that the spike in iGaming, social casino and streaming revenue over the past few months will revert back to pre-pandemic levels once casinos and cinemas reopen, however, we may be in for a surprise. Rather than lose the 20-50 percent revenue growth these three sectors have enjoyed, a return to normalcy may actually continue to accelerate revenue.

There are two principle drivers, somewhat related, why companies in the social casino, iGaming and streaming media spaces may be pleasantly surprised: the power of triggers and the weakness of cannibalization.

Triggers are a central driver of activity

The key to building a successful product is creating something that becomes a habit for your customer. Habit-forming products change user behavior and create unprompted engagement. The aim is to influence customers to use your product or play your game on there own, repeatedly, without relying on overt calls-to-action such as ads or promotions. The master of creating habit forming products is Nir Eyal, author of Hooked, who created a model to show how to create such products . 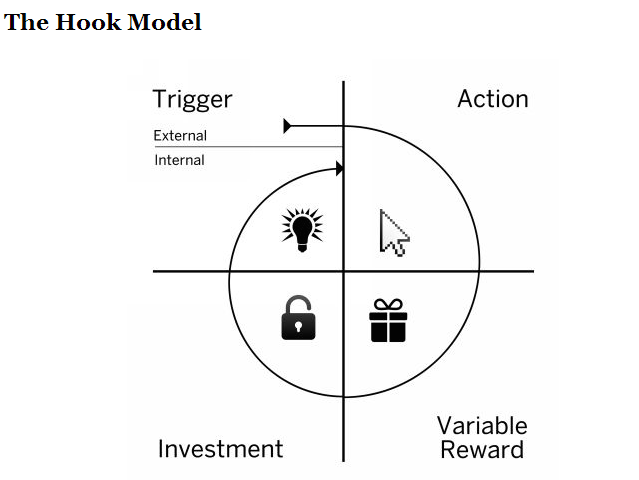 The first step of Eyal’s Hook Model of retention is triggers. Triggers cue the user to take action. There are two types of triggers: external and internal. Habit-forming products start by alerting users with external triggers like an email, a website link or the app icon on a phone. An external trigger communicates the next action the user should take (for more on triggers and how to build them, please see this post).

Triggers show how the reopening of casinos and cinemas can help iGaming and online social casino as well as streaming entertainment, respectively. Going to your favorite casino may trigger in players a desire to continue gaming online. Seeing an advertisement on television for Las Vegas or the local Native American casino will not only create interest in going to the casino but also will remind you to go online to play. Same for movies, going to the cinema to see the latest Disney release may encourage you to spend more time watching Disney+.

I find cannibalization one of the most over-hyped concerns, and it relates to how the social and online gaming spaces are impacted by the reopening of casinos (same for cinemas). Industries, and the economy overall, are not a static pie but a dynamic system that grows (and contracts) based on the interaction of numerous factors. I have been in multiple situations where my company cancelled or throttled new products to protect their existing business. What they ended up learning was that the new products growth actually helped the existing products or competitors came into the market and stole the audience that would have gone to the new product.

The casino space is rife with this thinking. When I first entered the social casino space in 2013, it was virtually impossible to form relationships with land-based casinos. They feared their players would flock online and it would cut into their revenue. Over the next year or so (2013-2015), more and more data showed clearly that land-based casino customers who also played online (in that situation, with social casinos), became more valuable to the land-based casino, not less. Land based casinos became very anxious to form relationships with social casinos because the players not only played both but were the most valuable customers. The MGM-Play Studios relationship behind MyVegas reflects how this attitude evolved.

I saw a similar phenomenon in the real money online gaming space. Players who played for both Real Money and Play Money were one of the most important segments of the ecosystem. Rather than trying to move the Play Money players to real money, companies realized that it was valuable to encourage continued playing on the Play Money and social products.

A similar phenomenon may occur as land based casinos re-open. Rather than the customers now playing online shifting their spend to land based, these customers may turn into VIPs for both land-based and either social or real money online casinos (depending on the geography).

We just do not know

I am not in the business of predictions and the Coronavirus pandemic is such a unique situation it is impossible to look into the past to know how it will play out but it is worth considering both triggers and cannibalization to understand one future scenario. Rather than seeing the movie or casino market as set at a certain amount with closures and re-openings just shifting where revenue goes, the dynamism of the market could help both sectors grow.