One of the most dangerous, and common, biases in our decision making is status quo bias, popularized by Nobel Prize winning economist Richard Thaler. This bias in decision-making, also commonly called inertia, prompts people to prefer for things to stay the same by doing nothing or by sticking to a previous decision. This bias becomes a problem when the expected value of a change, one that may only have small transition costs, is higher than the reward for sticking with the status quo. It is also a considerable problem with big decisions, where the benefits of change could be quite substantial. 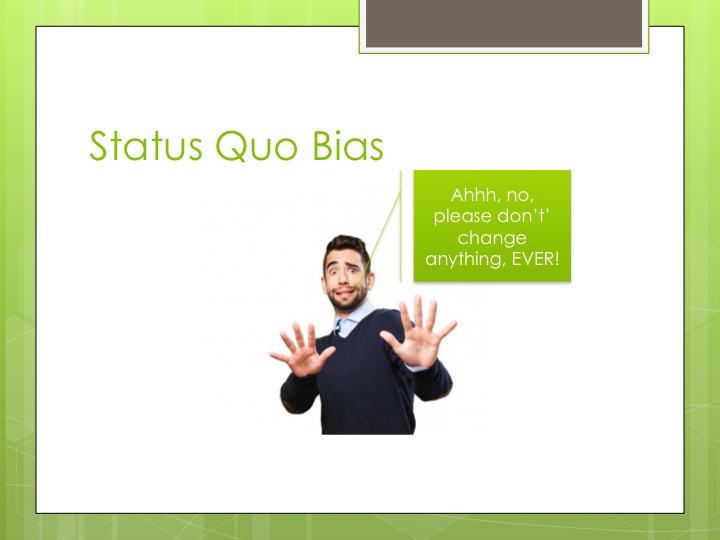 Why is there a Status Quo Bias

People do not intentionally make sub optimal decisions, so that leaves the question of why Status Quo Bias is so prevalent. First is the concept of loss aversion, people place a higher value on avoiding loss than acquiring gain. Many people would rather not lose $5 than win $10 and would not take such a bet with a 50 percent chance of either outcome, even though over time you would be much better off taking the bet. Status Quo Bias is tied to loss aversion because by diverging from the status quo, you often run the risk of losing something you currently have (even if the expected outcome is better).

Second is the concept of sunk cost. A sunk cost is a cost that has already been incurred and thus cannot be recovered. It should not enter into your decision making process because this cost will be the same regardless of outcome. You should only look at new costs you would incur versus the expected benefit, thus the ROI on the new, not total, costs. Sunk cost is intertwined with status quo bias because changing direction can negate previous investments, even if the expected outcome is better than sticking with the past decisions.

Third is the concept of commitments. Diverging from the status quo could force people to withdraw from previously made commitments. Individuals are likely to keep commitments to avoid reputation damage or cognitive dissonance. In the latter case, breaking with committed strategy would be subconsciously inconsistent with the initial commitment to the strategy or product and the reasoning that drove the commitment.

One other area that drives the status quo bias, particularly in a corporate setting, is politics. People are reluctant to pursue a strategy or product that breaks from existing dogma because they fear if a change they support fails it will be blamed on them while benefits from a successful shift will not be directly attributed. They are thus making a rational, albeit sub-optimal, decision not to support changes to the status quo.

When does it happen

There are many situations where Status Quo Bias leads to sub-optimal decision making. One area is product changes, particularly to a successful product, as the product managers or designers are reluctant to change something that is working even if the new option would be better. A car manufacturer may be reluctant to change the styling on a popular model even if overall tastes are changing. By not making the change, in the long run they will lose market share. A game designer may not want to change the user experience for fear of alienating current players but a new design could make the product much more appealing to new players and also generate more revenue long-term from existing customers.

Another area where Status Quo Bias has a destructive effect is on business models. In the video game industry, many successful game companies rejected the free-to-play model because they made millions, or even billions, of dollars based on their existing business model even though free-to-play was gaining share at a rapid rate. Now companies like THQ no longer exist because of Status Quo Bias.

New products are another area where Status Quo Bias leads to sub-optimal decisions. Companies may not introduce a new product because they fear it will negatively impact their existing products, even though the net impact would be positive. Conversely, a company that has invested significantly in a new product may continue to invest in it even if testing shows it will be a failure because they do not want to change the decision to pursue that product strategy.

How to avoid status quo bias

Admitting you have a problem is the first step in eliminating any bias, including Status Quo Bias. Recognizing there is a bias favoring inertia allows you to look at decisions more objectively. You should then focus on choosing the path that leads to the highest expected value, whether or not it represents a change.

In 2017, Richard Thaler won the Nobel Prize in Economic Science, and it validated one of the areas that could benefit social game companies highly. Thaler is one of the leaders in Behavioral Economics, where Daniel Kahneman previously won a Nobel Prize and the field Dan Ariely popularized in books including Predictably Irrational. The underlying idea in Behavioral Economics is that people do not always act rationally but their irrationally is consistent and can be modeled.

In traditional economics, economists make simplifying assumptions, with one of the most common being that people are perfectly rational. This simplification allows economists to build powerful models to analyze a multitude of different economic issues and markets. Nevertheless, economists and psychologists have documented systematic deviations from the rational behavior assumed in standard economics. By incorporating new insights from human psychology into economic analysis, Thaler provided a valuable set of analytical and experimental tools for understanding and predicting human behavior.

Many of the concepts and findings that Thaler identified are particularly relevant for game companies, particularly free-to-play gaming, and the broader technology space. By reviewing his primary findings, you can make your products more appealing and successful.

The endowment effect is how people value items they own more than they would if they objectively viewed the item. Somebody might not accept $10,000 for their used car, but if a car dealer offered the same car to them they would not pay $8,000 for it. This leads to sub-optimal solutions but is also a tool for keeping people engaged with your product, potentially by giving them something they may lose if they do not remain active.

Mental accounting is a psychological theory of how limited cognition affects spending, saving, and other household behavior. One motivation driven by mental accounting is that people group their expenditures into different categories (housing, food, clothes, etc.), with each category corresponding to a separate mental account. Thaler found that mental accounts are used more generally as a way for rational individuals to simplify their financial decision-making. Each account has its own budget and its own separate reference point, which results in restricted movement between the accounts.

In addition, advance purchases (e.g., buying a billion chips) are typically thought of as investments rather than purchases. At the same time, consumption of a good purchased earlier and used as planned (using the chips you bought last week for a new virtual item when it is released) is often coded as “free,” or even as savings. Decoupling spending and consumption in this way reduces the pain of buying.

Mental accounting is potentially important in three ways to social game companies. First, players might group their purchases by different areas, they may be willing to spend X for chips and Y for new content. Second, customers may have a total budget for social gaming and your priority is getting a larger share of the pie rather than increasing the pie. Finally, by getting people to purchase a large amount at once and then use it over time, they are less likely to feel pain from their consumption.

Thaler’s theory of diminishing sensitivity predicts that compound outcomes will be added together or separated before being evaluated. If customers try to edit outcomes to maximize their pleasure, they will try to segregate gains and integrate losses, to cancel small losses against larger gains, and (under some conditions) to segregate small gains (“silver linings”) from large losses. This is particularly relevant when structuring the pay-outs and volatility of social casino offierings.

In the planner-doer model, an individual is assumed to be both a narrow-minded doer, who evaluates options just for their current value, and a farsighted planner, who is concerned with lifetime utility. By appealing to both the planner and the doer, you can increase long term engagement of customers.

Perceived fairness is a strong determinant of behavior. People are more likely to accept a price increase if they feel the company needs to in order to remain profitable or to keep employees. People, however, feel it is unfair to increase prices due to rising demand. People who think they are being treated unfairly are likely to look for alternative products. This is particularly a problem in the digital world, where customers face different prices and AB tests and often consider it unfair that other players are getting a better value.

Since I have not earned a Nobel Prize (yet), I recommend you read Thaler’s work directly, including his book Nudge. There are many lessons that will make you both more effective individually and potentially make your products perform better.