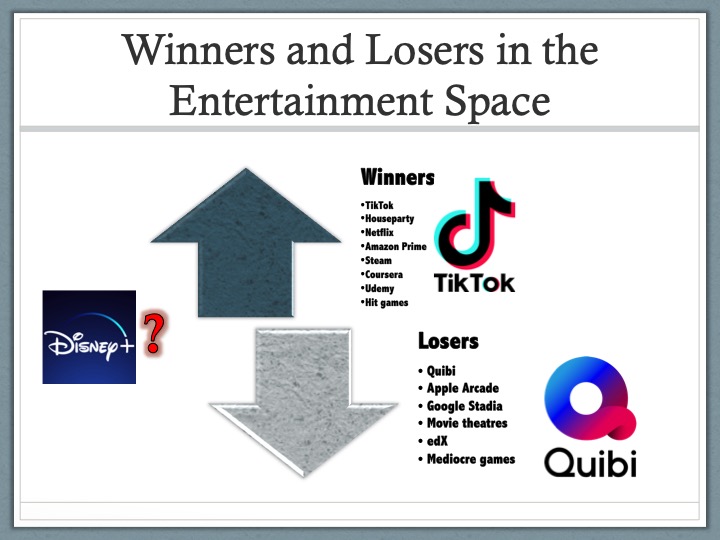 While it is impossible to predict exactly what businesses in the (broadly defined) entertainment space will benefit from Coronavirus and which are likely to fail, some basic and timeless principles help understand the likely winners and losers. There are two keys for successful entertainment company.

First, an abundance of content is the biggest revenue driver. While quality is obviously important, nobody wants to consume bad content, quantity is also critical. Content is a consumable and once it is consumed people look for more, if it is not available they will find something else. Successful operators constantly deliver new quality content to keep customers engaged.

Second, the subscription model is emerging as the dominant model in the entertainment space (not necessarily a new phenomenon, as Netflix and Amazon Prime have been around for years), growing from its existing stronghold to other parts of media. Additionally, subscriptions driven by Coronavirus are more likely to stay resilient in the aftermath of Covid19 as they will require action to cancel rather than asking people to continue making purchases.

Using this filter of abundant content or a compelling subscription model, it becomes easier to ascertain what companies and products will emerge from the Coronavirus situation in a good position.

There are likely winners that will emerge from the current situation. Those that I consider most prone to benefit include:

While there are multiple winners in the entertainment space, Coronavirus is also likely to highlight the companies with a flawed value proposition.

There is one entertainment offering that I am not willing to call a winner or loser yet, Disney+. There are mixed signal using both the content and subscription screen.

While Wall Street has lauded the initial subscriber numbers for Disney+, I am not convinced it will be a long term success. In only a few months, more than 50 million people subscribed to the service, exceeding even the most optimistic projections. Given these subscriber numbers, it is easy to assume that the service will be a long-term success approaching the value of a Netflix.

The concern, however, should be the depth and breadth of content. Unlike Netflix and Amazon Prime, Disney+’s content is limited to the Disney family (Disney, Star Wars, Marvel, National Geographic and Pixar). While this is very compelling content for many (about 50 million) initially, will it sustain? People consume content and even this large back catalog of offerings will be old to many of the 50 million in a few months or a year. Relying on first party content, will Disney be able to keep a sufficient content flow not only to appeal to new customers but keep from churning a big portion of these 50 million subscribers.