I recently wrote about the winner-takes-all economy, based on what I read in The Second Machine Age by Erik Brynjolfsson and Andrew McAfee

. The authors also provided some fascinating insights into how recombinations are driving economic growth. The insights about recombinations is very helpful in understanding the type of start-ups that are most likely to succeed.

Effectively, recombinations are taking different technological improvements and combining them to create disruptive products. An example they use is Waze, the smartphone app that provides optimal driving directions. Waze is a recombination of a location sensor, data transmission device (that is, a phone), GPS system, and social network. The team at Waze invented none of these technologies; they just put them together in a new way. None of these elements was particularly novel. Their combination was revolutionary.

While recombinations initially feel like something that would drive incremental innovation, because you are combining multiple rapidly increasing technologies it leads toexponential growth that creates staggeringly big numbers, ones that leave our intuition and experience behind.

The authors cite economist Martin Weitzman, who developed a mathematical model of new growth theory, in which the fixed factors in an economy—machine tools, trucks, laboratories, etc— are augmented over time by pieces of knowledge that he calls ‘seed ideas,’ and knowledge itself increases over time as previous seed ideas are recombined into new ones. This is an innovation-as-building-block view of the world, where both the knowledge pieces and the seed ideas can be combined and recombined over time. This model has a fascinating result: Because combinatorial possibilities explode so quickly, there is an infinite number of recombinations of the existing knowledge pieces. 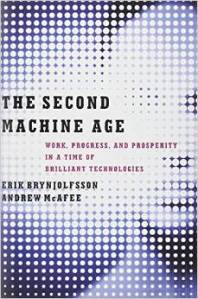 Driving the power of recombination is digitization. Digitization is storing and using information in a digital format. In an age of computers and networks, information is costly to produce but cheap to reproduce. Digitization increases understanding. It does this by making huge amounts of data readily accessible, and data are the lifeblood of science.

Again, the authors cite Waze as an example of digitization driving recombination. The service is built on multiple layers and generations of digitization, none of which have decayed or been used up since digital goods are non-rival. The first layer is digital maps, which are at least as old as personal computers. The second is GPS location information, which became much more useful for driving when the U.S. government increased its GPS accuracy in 2000. The third is social data; Waze users help each other by providing information on everything from accidents to police speed traps to cheap gas. Finally, Waze makes extensive use of sensor data, in fact, essentially converting every car using it into a traffic-speed sensor and using these data to calculate the quickest routes. The key is that all of this data is digital and can thus be combined with each other.

Digitization also leads to better products and drives out inefficient companies. Lower search and transaction costs mean faster and easier access and increased efficiency and convenience. Yelp collects millions of customer reviews to help diners find nearby restaurants in the quality and price ranges they seek, even when they are visiting new locations. The reservation service OpenTable then lets them book a table effortlessly. In aggregate, digital tools like these make a large difference. In the past, ignorance protected inefficient or lower -quality sellers from being unmasked by unsuspecting consumers, while geography limited competition from other sellers. With the introduction of structured comparison sites like Metacritic and Kayak, video games, airline travel, banking, insurance, car sales, motion pictures, and many other industries are being transformed by consumers’ ability to search for and compare competing sellers. No longer can a seller of substandard services expect to feed on a continuing stream of naïve or ill-informed consumers. It also moves many product categories from success being marketing driven (a good box used to be all you needed to sell a video game) to design and quality driven.

The authors also point to the digital interconnection of people worldwide as driving growth through recombination. As Julian Simon, one of my favorite economists, showed years ago, there is no better resource for improving the world and bettering the state of humanity than (7.1 billion) people. Our good ideas and innovations will address the challenges that arise, improve the quality of our lives, allow us to live more lightly on the planet, and help us take better care of one another. It is a remarkable and unmistakable fact that virtually all environmental (with the possible exception of global warming), social, and individual indicators of health have improved over time, even as human population has increased. This improvement is not a lucky coincidence; it is cause and effect. Things have gotten better because there are more people, who in total have more good ideas that improve our overall situation.

The theory of recombinant innovation stresses how important it is to have more eyeballs looking at challenges and more brains thinking about how existing building blocks can be rearranged to meet them. This theory further holds that people also play the vital role of filtering and improving the innovations of others. As the authors flamboyantly write, “the second machine age will be characterized by countless instances of machine intelligence and billions of interconnected brains working together to better understand and improve our world. It will make mockery out of all that came before. “

New business models and processes are the final step in our evolution to a recombination driven economy. Chess great (and current Russian politician) Garry Kasparov offers an important clue when describing a match he played against the Bulgarian grandmaster Veselin Topalov, during which they were each allowed to freely consult a computer. Kasparov knew, he wrote, that “since we both had equal access to the same database, the advantage still came down to creating a new idea at some point.”

The creation of new business and technologies in a recombinant economy have one thing in common: ideation, or coming up with new ideas or concepts. Good new ideas or concepts come drive innovation, since computers can easily be programmed to generate new combinations of preexisting elements like words but will not drive new breakthrough products. Ideation, large-frame pattern recognition, and the most complex forms of communication are cognitive areas where great founders and entrepreneurs have the advantage and the opportunity to create value.

So what does it mean

Since you have made it this far through my post, you may be thinking, “This is cool, but how does it impact me?” Understanding these underlying dynamics in our economy helps show where the biggest opportunities are.

This progression of forces (from digitization to the networking of the word) shows that digital innovation is recombinant innovation in its purest form. Each development becomes a building block for future innovations. Progress does not run out; it accumulates. And the digital world extends into the physical one, leading to cars and planes that drive themselves, printers that make parts, and so on. Moore’s Law makes computing devices and sensors exponentially cheaper over time. Digitization makes available massive bodies of data relevant to almost any situation, and this information can be infinitely reproduced and reused because it is non-rival. As a result of these forces, the number of potentially valuable building blocks is exploding around the world, and the possibilities are multiplying as never before.

For the start-up inclined, finding the right combination is worth billions. Combining messaging with social networks may not sound cool, but it is exactly what Jan Koum did when building with WhatsApp and he created $19 billion in value. Combining location data, traffic information and yield management based on emerging technologies may not be the end-all of “innovation” but it is how Travis Kalanick created Uber, now valued at over $18 billion. Combining digital photography, online photo filters and social networking may not of been a technological breakthrough, but for Instagram founders Kevin Systrom and Mike Krieger it was worth $1 billion.

One thought on “Creating billion-dollar businesses through recombination”

Follow The Business of Social Games and Casino on WordPress.com
Join 1,407 other followers