I have been around many games and products that had poor results but the game teams kept thinking that everything would be fixed with the new features they had on the roadmap. It never worked. A recent post by Andrew Chen, “The Next Feature Fallacy,” shows the metrics of why adding product does not turnaround an unsuccessful one. 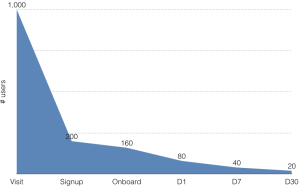 Chen points out that most features will not impact this curve for two reasons:

This problem of focusing on features that will not fix your game are a result of focusing on users/players already deeply engagement and trying to make their experience better.

The best way to prioritize features

When prioritizing and designing features, you need to focus on reaching the most potential users. As Chen points out, “it’s a good rule of thumb that the best features often focus mostly on non-users and casual users, with the reason that there’s simply many more of them…. Similarly, it’s important to have deep insights on what users need to do to become activated, so that their first visit is set up properly. ” If you build features that truly impact users at the top of the funnel, it will have a follow on impact to your entire game.