I was recently speaking with a former colleague who is a leader of one of the most successful businesses I have been part of, a mini-corn (a near unicorn, $500 million – $1 billion valuation), and I realized that there is one overriding driver of large scale success, and it is determination. Anyone who reads my blog (and by definition that means you) realizes I am a huge advocate of analytics based decision making, blue ocean strategy, open management, customer driven products, etc. These are all great and will help you grow and optimize your business but the truly huge companies get there because of the sheer determination and take no prisoner attitude of their leaders.

I was fortunate enough to be part of a team like this and people often ask what was the secret to its success. They often assume it is great technology, design genius or some black box, even internally most of us did not see it (myself included), but the key driver of greatness was the sheer determination of the top leadership. The leadership’s entire focus was on growth, always grow, never stop, never slow down, never let anything or anyone get in the way.

Not a popularity contest

This attitude would often make people uncomfortable but they would never stop pushing. This often meant taking risks that other companies would not take or risks that others in the company did not want to take. It often meant hurting feelings, not just of competitors but those internally who lost resources or prestige to the steamroller. 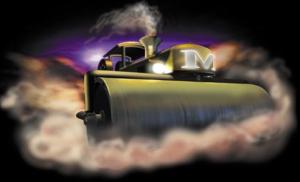 It also meant never being satisfied, and this last principle is what helped me see the overall determination. Even when this leadership team had seen more success than anyone else I have ever met, they still have as much hunger as the first day I met them. It is still all about growth, not just winning but owning the space and then it will be about further distancing themselves from number two. It’s probably very much the same as why Bill Belichick does not stop when the Patriots are up by 10 in the fourth quarter, but will still continue passing and competing until they win by 31.

A related attribute that I noticed with these leaders that is directly tied to their determination is they do not let setbacks stop them. The team I was on had more than its share of issues, internal and external. There were a lot of people who gave up hope but it did not slow the leadership. They did not ignore the setbacks, not in the least, but they did not let them stop the company (and they drove right over those who tried to use the setbacks as a reason to slow down).

There are always setbacks, whether you are CEO of the biggest unicorn (ask Travis Kalanick about India), President of the most powerful country (ask Barack Obama about Syria or Congress) or the best basketball player in the world (ask Lebron James about Tim Duncan). In business, setbacks are even more part of the order of things. Not every launch will go as planned. Not every development project will stay on schedule. The reality of the world is it is uncertain, and even if you do everything right sometimes it will not work (the only time everything goes as planned is if you have a plan that does not try to achieve anything).

What separates the leaders of the team I mentioned is that they did not let setbacks stop them. If a product does not hit its numbers, fix it and increase the projected numbers. The mantra is always to keep pushing, keep moving forward. There will always be adversity, the creators of the unicorns and mini-corns are the ones who do not let that adversity stop, or even slow, them.

One of my favorite movie clips from the last Rocky movie (so one that very few people have actually seen) does a great job of capturing this attitude. As Sylvester Stallone says, “it’s about how hard you can be hit and keep moving forward”:

Ain’t about the perks

When I read Peter Thiel’s Zero to One

, I disagreed with some of his ideas but one really stuck with me, he never invests in companies where employees are focused on the perks. As he points out, people show up and work at the great companies because they are driving to achieve something big, they are part of a huge vision. If they take a job because of the free breakfast, refrigerators stocked with Monster or plethora of foosball tables, they are not the people you want. You want people who believe in the vision, in the company and want to build it something special, not those who want to play table tennis for an hour.

It’s not about playing business

One of the leaders who created a mini-corn often used the phrase “we’re not playing business” and this was another attribute that drove the company’s success. His focus was on growth, on getting more users and generating more revenue. It was not on creating detailed financial plans or offsites where everyone held hands. It was all about growing the business as fast as possible and a lot of “playing business” was just distractions from this goal.

I am not advocating this approach for everybody. As I have written on several topics, you need to follow the path that makes you happy. This approach leaves very little room for your family, your friends and maybe even your health. It is also very uncomfortable, it sucks to alienate co-workers or even competitors, or to drive your team out of their comfort zone. It is actually not the best approach for most. Instead, I think it is important to understand what is going to create most of the unicorns and mini-corns of the future; it’s not the cool piece of tech or the great understanding of metrics. You then need to decide if you have the personality to lead or be part of one of these companies but it’s important to understand the reality of business.

The great companies are created by leaders who never stop. While analytics, tech, strategy can create competitive advantages and should not be ignored, it is unrelenting drive that creates the great companies. It is the ability to rebound from setbacks, never be satisfied and focus entirely on growth that builds the truly enormous businesses.