Activision’s earnings announcement yesterday shows how attractive successfully conquering the physical virtual goods market is. On November 27, I blogged that Activision would be the big winner Q4 2012 on the strength of the Skylanders franchise and its reliance on a new business model, selling physical versions of virtual goods. I elaborated on that post earlier this month, commenting that the emergence of the Physical Virtual Goods monetization model was one of the most exciting developments in the gaming space in years . 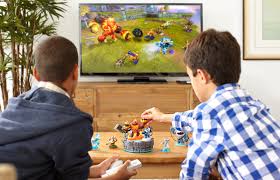 Today, Activision’s stock rose 14 percent because earnings tripled from the fourth quarter last year (in a period in which overall video games sales slumped). Net income increased 257.58 percent to $354 million in the quarter versus a net gain of $99 million in the year-earlier quarter. Revenue rose 25.66 percent to $1.77 billion from the year-earlier quarter (unfortunately, some of that is due to my family).

This report affirms my belief that physical virtual goods are an incredible opportunity. While I do not advocate trying to copy exactly what Activision has done (I believe in blue oceans, not fast following), there are many elements in this space (e.g., product type, demographic) that represent incredible opportunities for game companies.

Follow The Business of Social Games and Casino on WordPress.com
Join 1,407 other followers