I love writing about applying lessons from sports to the tech and game spaces, so an article I saw in the MIT Sloan Management Review, “What Businesses Can Learn from Sports Analytics” by Thomas Davenport, really resonated with me. Davenport is one of the people who have molded strongly my love of analytics, as his book Competing on Analytics

initially got me thinking how the game industry could be improved by applying analytics. That the Oakland A’s are again one of the surprise success stories in baseball further reinforced the relationship of analytics and sports. In Davenport’s recent article, he shows how we can apply techniques used successfully in sports to tech or game companies. 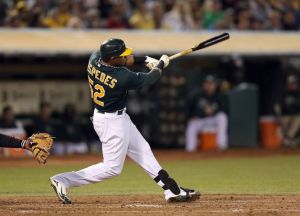 Analytics is all the rage in sports. Davenport points out that every professional baseball team has an analyst on staff, while many professional football, soccer and basketball teams also do. Yet, other sports teams are behind many other industries because they are often smaller organizations and typically have old-school executives who do not appreciate the value of analytics. Although not applied universally, Davenport draws several lessons from how sports teams use analytics that are relevant to all businesses.

Important decisions in sports, such as which players to acquire and how much to pay them, must be made and managed at multiple levels. Thus, alignment at every layer of management is critical. The Dallas Mavericks, for example, have an analyst who sits on the bench during games (including when they won the 2011 NBA Championship).

The business equivalent is for CEOs, C-staff, middle managers and analytical specialists to work closely together and consult frequently with each other on key decisions.

Focus on the human dimension

Sports teams realize that their players are their most important—and their most expensive—asset. Professional teams focus on the human dimension of performance in a variety of ways.

Second, teams are beginning to assess not just individual performance but also performance in context. In effect, these statistics show how many more games the team wins with the player over an average replacement player.

In most companies, however, analytics have focused on operational and marketing issues and not on the human dimension of performance. Even when companies do employ human resource analytics, their approaches are not as sophisticated as sports teams. Assessing employees by investigating a group or unit’s performance with and without that person would be a valuable technique.

Professional sports teams are coupling the latest technology with location, often leveraging wearables. Soccer players wear a GPS-based locational device that captures all movement on the field. Baseball teams analyze where players hit the ball and thus how their performance would be impacted by moving to a new stadium (for example if they see a certain trajectory to left field resulting in outs for the player but at a new stadium would be home runs, that player has a higher value to them). Business can use similar data for everything from optimizing logistics to minimizing waiting times. Davenport also postulates that retailers could analyze video to determine what customers shop for before they buy and what promotions catch their attention.

Work within a broader ecosystem

Professional sports teams in and of themselves are often smaller enterprises with much of their revenue going to salary, which leaves little in the budget for data analytics. Thus, teams often need to work within a broader ecosystem of data, software and service providers. The key in these partnerships is to draw as much as possible from the partners while maintaining key competencies internally. For example, the Orlando Magic work closely with Disney (which has a strong analytics team supporting Disneyworld) for joint promotions to residents and visitors in Orlando.

Working within an ecosystem often necessitates sharing ideas, and there is clearly a trade-off between the benefits of broad adoption among competitors and gaining a competitive advantage through analytics. If your best techniques are shared with competitors, it is no longer an advantage but simply a part of doing business. Some sports leagues have adopted new data technologies and create both customized and standardized reports for individual clubs.

The clubs, however, try to build an advantage by applying unique resources (internal analysts, additional data sources, etc.) to the situation. Even better applying the data (or not ignoring it) can still create a competitive advantage.

Davenport points out that “there are just too many different techniques, types of data and other aspects of analytics to exploit, and even the largest corporation can’t excel on its own.” Thus, it is important for companies to leverage and even build communal resources while maintaining unique internal analytics capabilities that turns this data into a competitive advantage.

Many soccer, baseball and football players have begun analyzing their own performance using public or team data, including the location or GPS data discussed above. One baseball player (who had no real training in analytics) used data to learn that he was allowing too many fly balls compared with ground balls, and fly balls had a 2X probability of leading to a run. Thus, the player worked on a new pitch that allowed him to improve his performance considerably.

Business managers and leaders may not have as much data on their performance as a professional athlete, but they still would benefit from becoming an analytical amateur. Many firms have evaluation and compensation models with measurement along particular criteria. Analytic amateur employees, for example, could keep track of their own scores on these metrics and use that information to improve their performance.

One thought on “Lessons from sports analytics”